Man’s best friend has earned its title for good reason: dogs are quite possibly the most loyal of all animals.

For proof, all you need to do is look at our shared pasts. Human history is packed with tales of dogs who went to unfathomable lengths to protect and be with their owners.

From fishing boat dogs who rescue drowning sailors to lost dogs who walk hundreds of miles to reunite with their families, the stories suggest that dogs’ loyalty runs in their blood.

But just when did this loyalty develop, and why do dogs exhibit it so strongly?

Let’s get inside a dog’s head and find out what makes our furry friends so loyal to us.

The Beginnings of the Bond

Stories of canine loyalty go back hundreds of years, but the bond between humans and dogs goes back much further — to the early days of domestication some 15,000 to 40,000 years ago.

Dogs back then weren’t the dogs we know today. They were wolves, and though they were wild, they played a far more active role in their domestication than you might think.

As early humans became more adept at hunting, wolves began to take notice. Gutsier members of the pack would follow hunters and scavenge the leftovers from their hunts — and gutsier humans would get closer to the wolves, throwing them scraps and gradually gaining their trust.

Over thousands of years, humans and wolves evolved alongside each other, existing symbiotically with each benefitting from the other. Wolves protected humans, kept intruders at bay and provided companionship; humans protected the wolves and provided them with food.

Eventually, the difference between wild wolves and tamed ones became so pronounced that they split into two species: the gray wolf and the domestic dog.

So it seems that dogs have quite literally evolved to be loyal to humans. Canine loyalty appears to be a recognizance of the mutual benefit our two species provide one another — and of how special that is.

Even if humans never entered the picture at all, there would still be ample evidence of canine loyalty in their pack relationships.

As social creatures, dogs and wolves enjoy the company of their species. Packs hunt together, play together, travel together and sleep together — when you’re a wolf, you don’t get much alone time!

And that’s a good thing, because without the strength of their packs, wolves would have a much harder time surviving.

Hunting in packs allows wolves to take down much larger prey than a single wolf could manage alone. And any potential attackers are much less likely to take on an entire pack than they would be if each wolf was separated.

There’s safety and strength in numbers, and canines know this. Their loyalty to the group is what keeps them alive.

Domestic dogs don’t face the same dangers that wild wolves do, but that pack mentality is still alive and well in their brains. Thus, dogs are inclined to be loyal to those who share their territories, for their own good and for the good of the pack.

This explains why dogs are willing to go to such great lengths to help those they’re close to.

To the fishing boat dog, the ship’s crew is his pack. If one of them falls overboard, the dog stops considering his own needs and jumps to the rescue — it’s the pack that matters, not him.

And the lost dog hundreds of miles from home isn’t thinking about himself. He’s thinking about his family — his pack — and how much they need him, and that’s what motivates his extraordinary journey back to them.

The Spoils of Loyalty

Instinct isn’t the only thing that motivates a dog to be loyal. We give our dogs some pretty swanky rewards for their loyalty… and they know this.

These rewards help a dog to establish his in-pack loyalties — that is, who in the household he’s most loyal to. They’re not the only reason he’s so true to you, but they certainly don’t hurt, either!

Thinking with Their Stomachs

Ask any dog owner what a pup’s primary motivation is and you’ll hear one word repeated over and over again: food.

It makes sense. In the wild, a canine’s life is centered around the quest for the next meal: finding prey, tracking and killing it, scavenging others’ kills and hiding caches of meat for later.

Modern dogs live pretty cushy lives by comparison, with two or three square meals a day that come no matter what. But deep inside, their ancestral memories of the wild are alive and well, and they’re accompanied by the ever-present fear of starvation.

Plus, a dog’s sense of smell is up to 100,000 times more powerful than a human’s, which makes food smell and taste absolutely irresistible.

So it’s no wonder that a dog will do just about anything for food. And it’s also no wonder that dogs tend to be most loyal to the people who feed them most often.

In fact, it’s a relationship balance that dates back to the dawn of domestication.

Back in those days, the friendliest wolves enjoyed the most extra food from humans. And if an individual wolf stuck around long enough to bond with the humans, that wolf would no doubt receive the best scraps.

So it stands to reason that the hunter with the best scraps would be the wolves’ favorite — the one they’d be most likely to bond with.

That correlation has stuck around for tens of thousands of years. It’s why the person who feeds a dog most frequently is often that dog’s favorite: pups just can’t help but think with their stomachs.

All You Need Is Love

That’s not to say that a dog’s loyalty is purely motivated by ancient instincts and a growling stomach. No, there’s far more to a dog-human bond than that — there’s also love.

Love between humans is a wonderful feeling, one that we can’t help but cling to and prolong for as long as we can. The presence of our loved ones makes us feel safe, secure, peaceful, excited, warm and, well, loved.

And love also instills in us a deep empathy for the other person. Whatever they feel, we feel too, as if we were experiencing the same things.

It takes a bit of practice to tell what dogs are feeling, but once you learn the basics of their language, that loving empathy is easy to extend to them too. When our pups feel joyful, sad, confused, anxious or content, we can tell, and we respond with love.

Our empathy for dogs is why we’re so loyal to them. And the same is true vice-versa too.

Science has shown that dogs can read human emotions, and what’s more, they can understand what they mean and respond accordingly.

And what’s more, dogs feel the strongest of emotions: love.

It’s not news to anyone who’s bonded with a dog, but science finally agrees that dogs love us like we love them. And that love begets loyalty — the desire to be near us, help us and trust us with their lives.

You’d do anything for your spouse or your child because of love. It’s a bond that’s incredibly difficult to break and that drives us to do extraordinary things for those closest to our hearts.

And your dog would do anything for you because of love. He’d pull you from a burning building, run across the country or fend off an army of intruders to keep you near and safe.

Love, as they say, makes the world go ’round. And it’s what makes your dog’s loyalty so powerful, so unbreakable and so special.

63 Shares
Tweet
Share
Share
Pin
QUOTE:
"If you think dogs can’t count, try putting three dog biscuits in your pocket and then give him only two."
-- Phil Pastoret 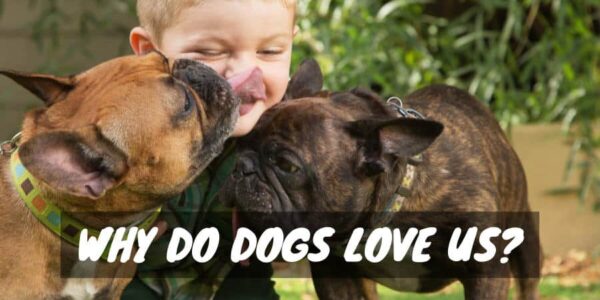 1 thought on “Why Are Dogs SO LOYAL? (Unbreakable Bonds)”